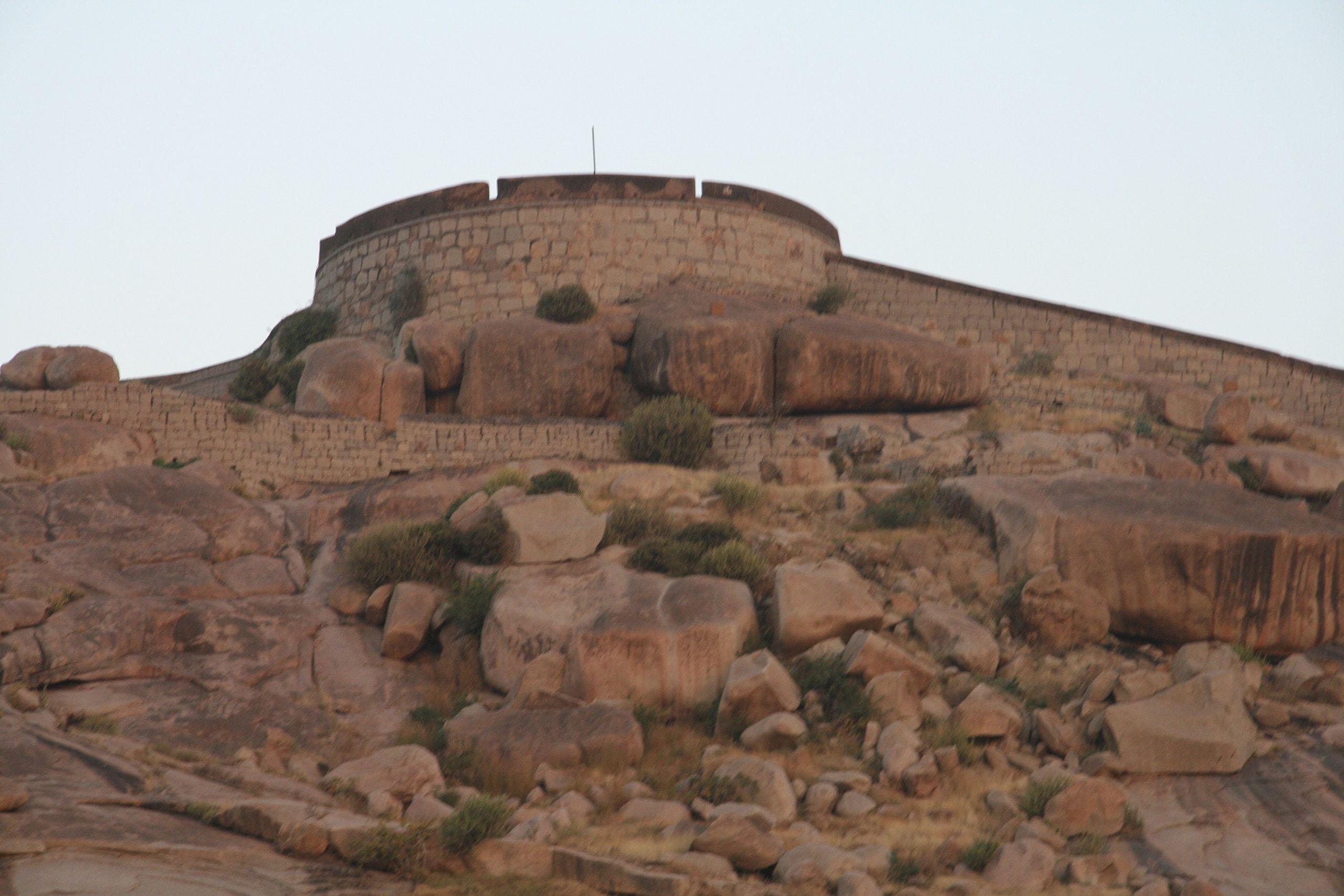 Ballari is a historical city, which is now a steel hub of South India.

Ballari Fort is the prime attraction of Ballari. Ballari Fort was built by Hanumappa Nayaka during the Vijayanagar era on top of the Ballari Gudda or the Fort Hill. Hyder Ali, who invaded the region took possession of the Fort from the Nayaka family in 1769, got the fort renovated and modified with the help of a French Engineer. The fort is divided as the Upper Fort and the Lower Fort. The Upper fort is a polygonal walled building on the summit, with only one approach, and has no accommodation for a garrison. There is only one way up to the fort, which is a winding rocky path amongst the boulders. It s said that Muzzaffar Khan, the Nawab of Kurnool, was confined here from 1823 to 1864 for the murder of his wife.

Ballari has decent rail connectivity from Bangalore (Train: Hampi Express 16591/16592), Hyderabad, Hubli, Kolhapur, Guntakal. For other cities like Chennai/Mumbai/Delhi there is very good connectivity from the nearby town of Guntakal.

If you are on a tight budget, you can opt for the passenger trains as well.

Ballari is around 300km from Bangalore and is well connect by National and State Highways. Ballari is served by various bus lines like KSRTC, APSRTC and other private operators. Direct Bus services are present from Mumbai,Bangalore,other major cities of Karnataka and neighboring cities of Andhra Pradesh.

You can use the government buses which ply along the main roads and to/from the important points of the city(Royal, Mothi, Durgammagudi, SP circle, Sudha cross, 1st gate, 2nd gate, OPD, MG, New bus stand, Old bus stand). They charge around ₹10 (as of 2016) for most distances.

These 3-wheeled vehicles can be hired to travel from anywhere to anywhere in the city. They do not use an automated metering system, hence talk about the amount before getting into the vehicle. Generally 70% of the auto-driver's initial quote is a fair amount to pay, but if they understand that you are not from the place then beware, talk to a local for the correct price for your destination.

Ola cab service is available for a quick ride.

The South side of the Human Face hill, Bellary, India

There is a beautiful mosque near the cantonment area which has a dome similar to that of the Masjid-e-Nabi in Medina. Hazrath Tipu Sultan Masjid is one of the oldest mosques in the Fort area behind the Government Polytechnic. Jamia Masjid and Khadirya Masjid are other oldest mosques in the heart of the city.

Ballari being the district headquarters attracts traders, framers from its neighborhood. You can do lots of shopping, jeans are particularly famous. Iron kitchen vessels are also unique, and can be found in plenty. There is a local craft fair that happens in August-Sep near the municipal school grounds that may be of interest. The soft grey stone near the region is often made into small stone artifacts which are sold by peddlers. In addition, the Lambanis are tribal women from the forests who are famous for their needlework and mirrorwork. Sadly, very little of their work is available in the shops, and you need to find a specific hall selling these.

There are numerous other lodges abound near the bus stops and railway stations.